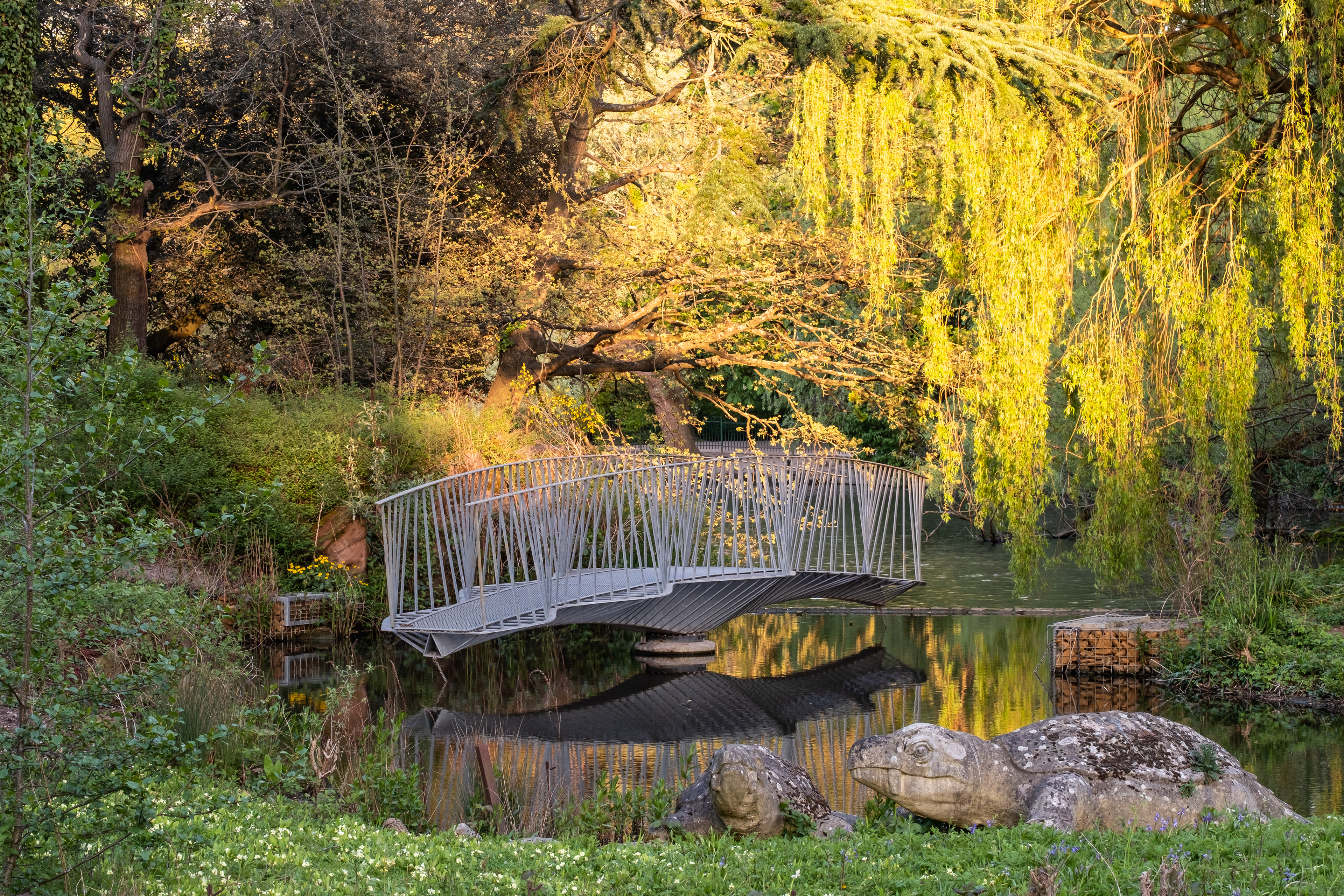 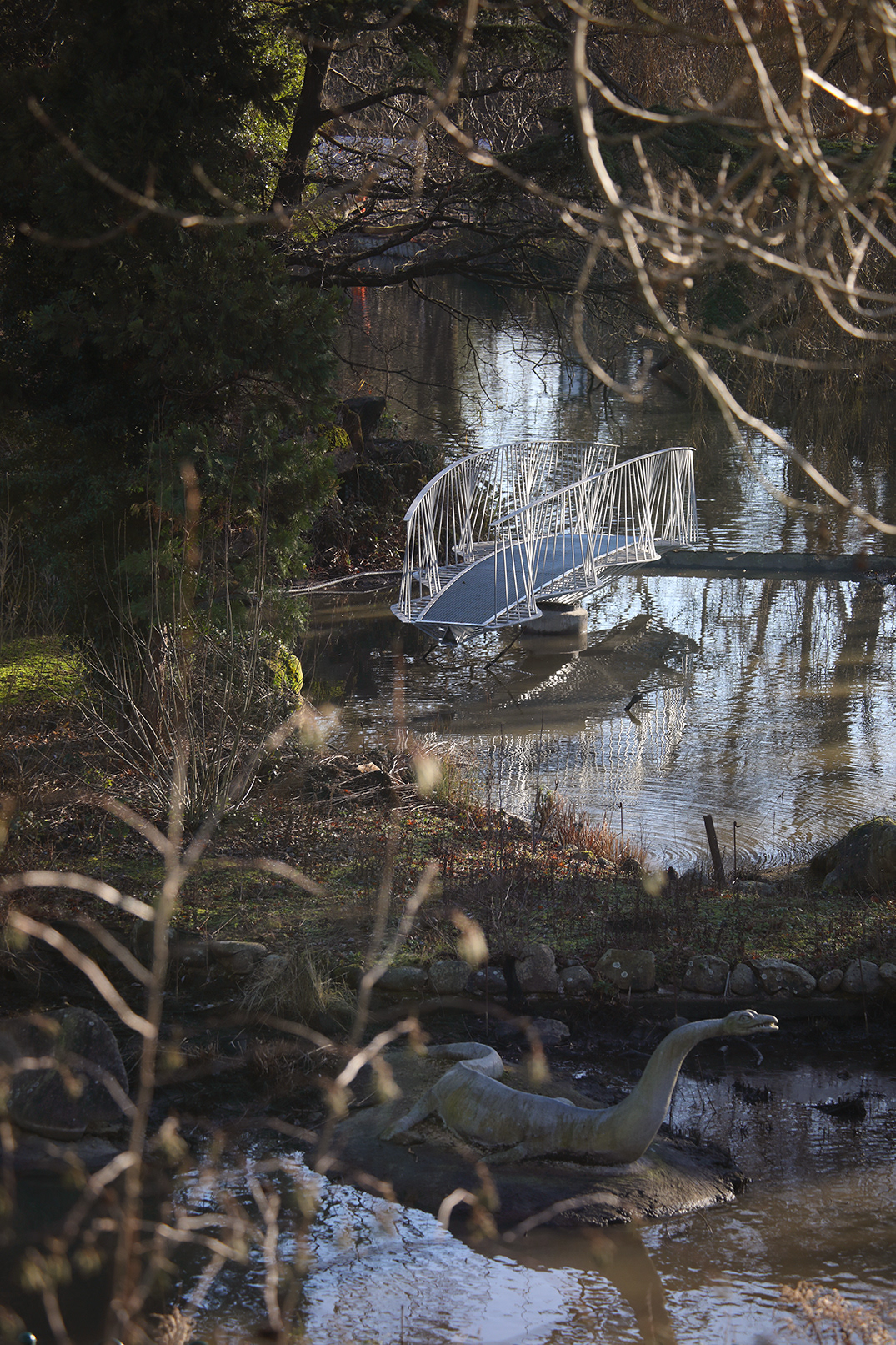 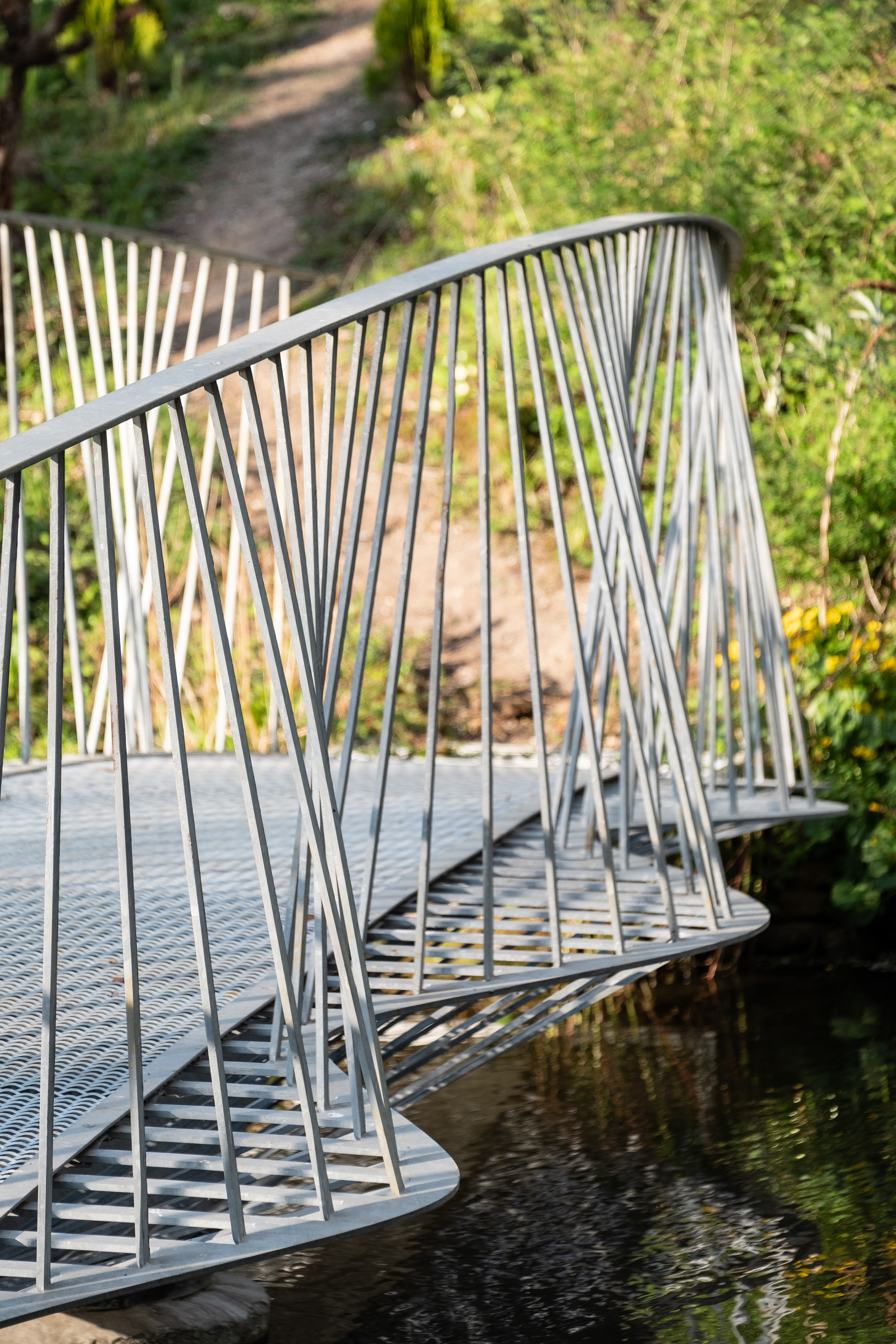 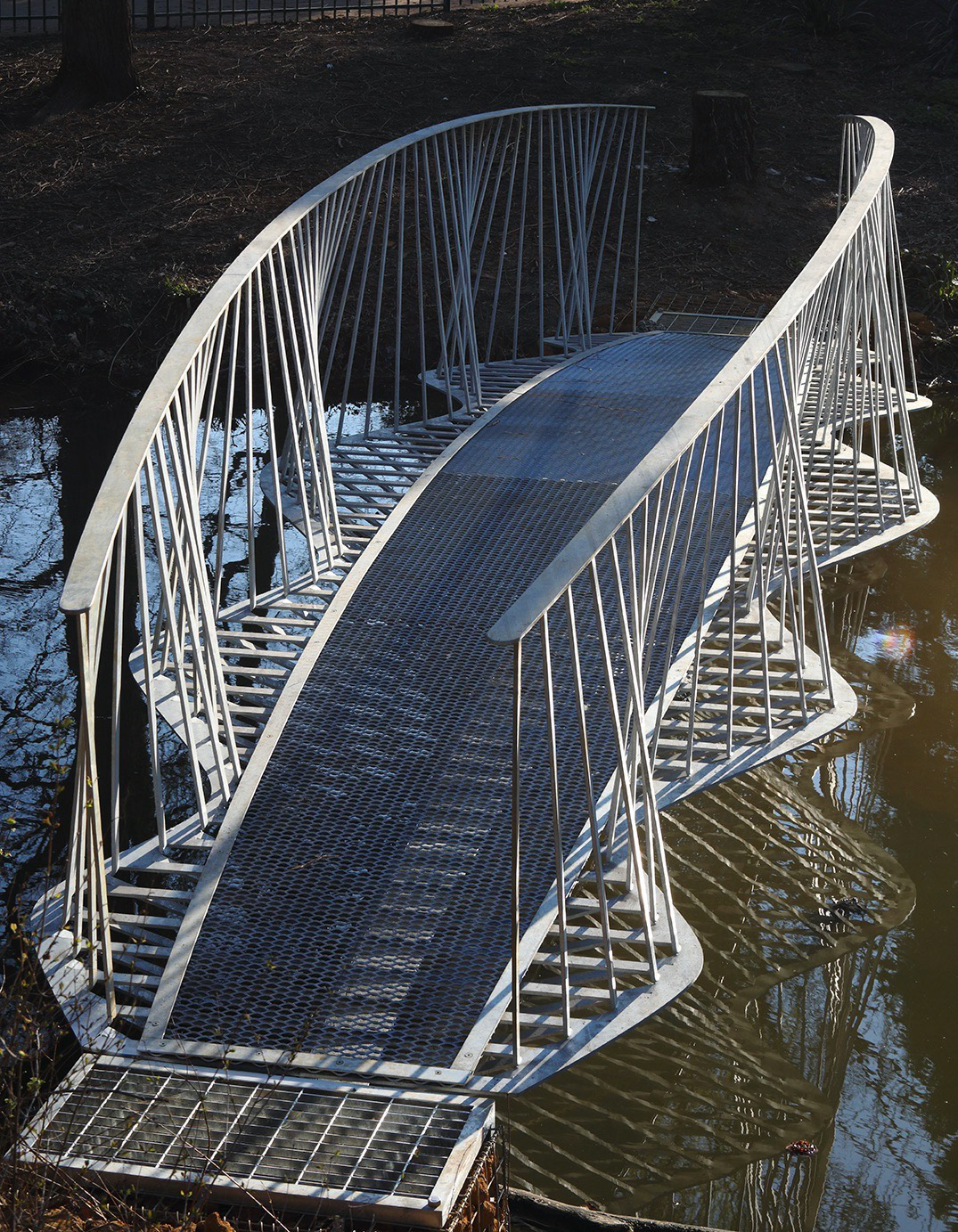 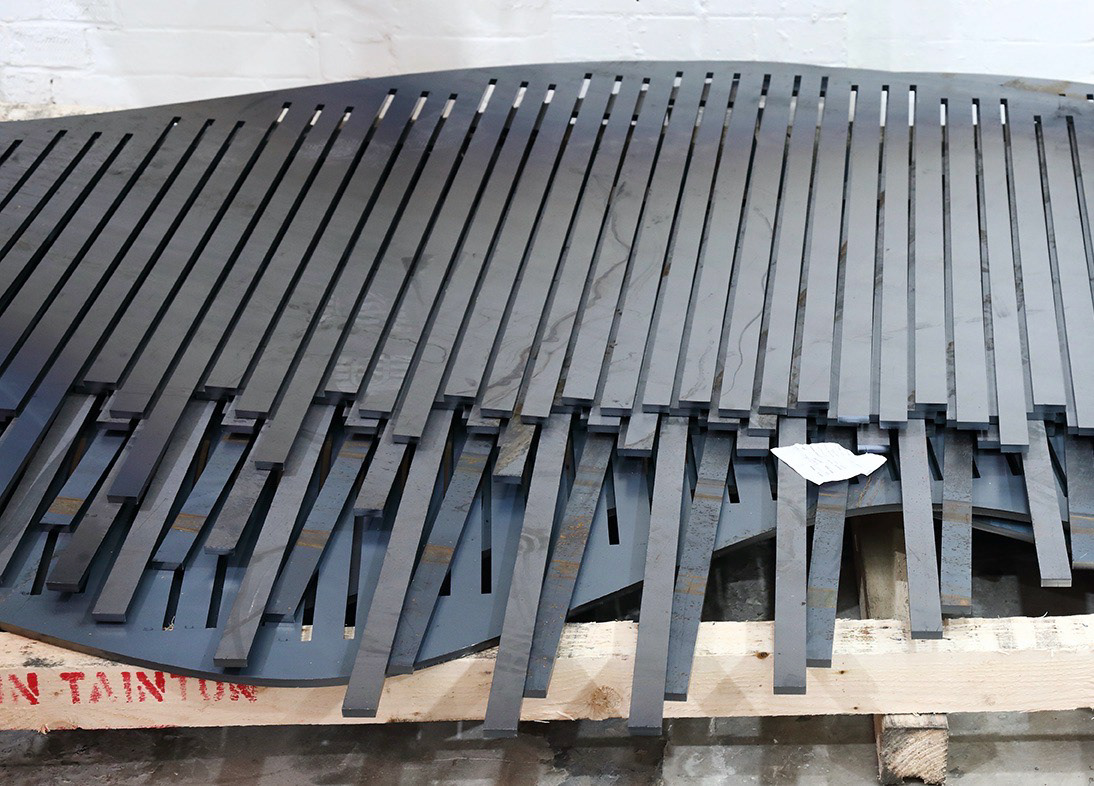 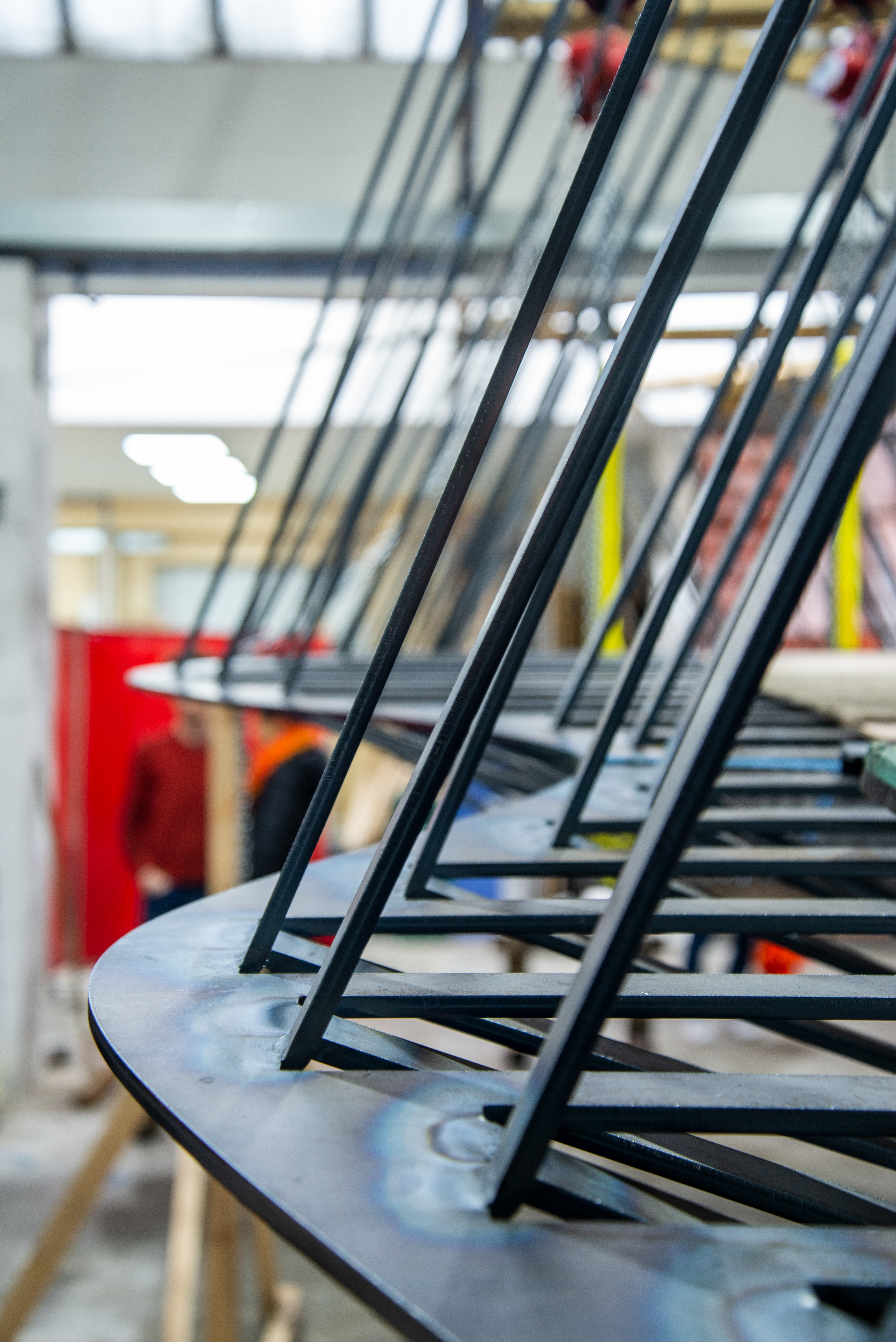 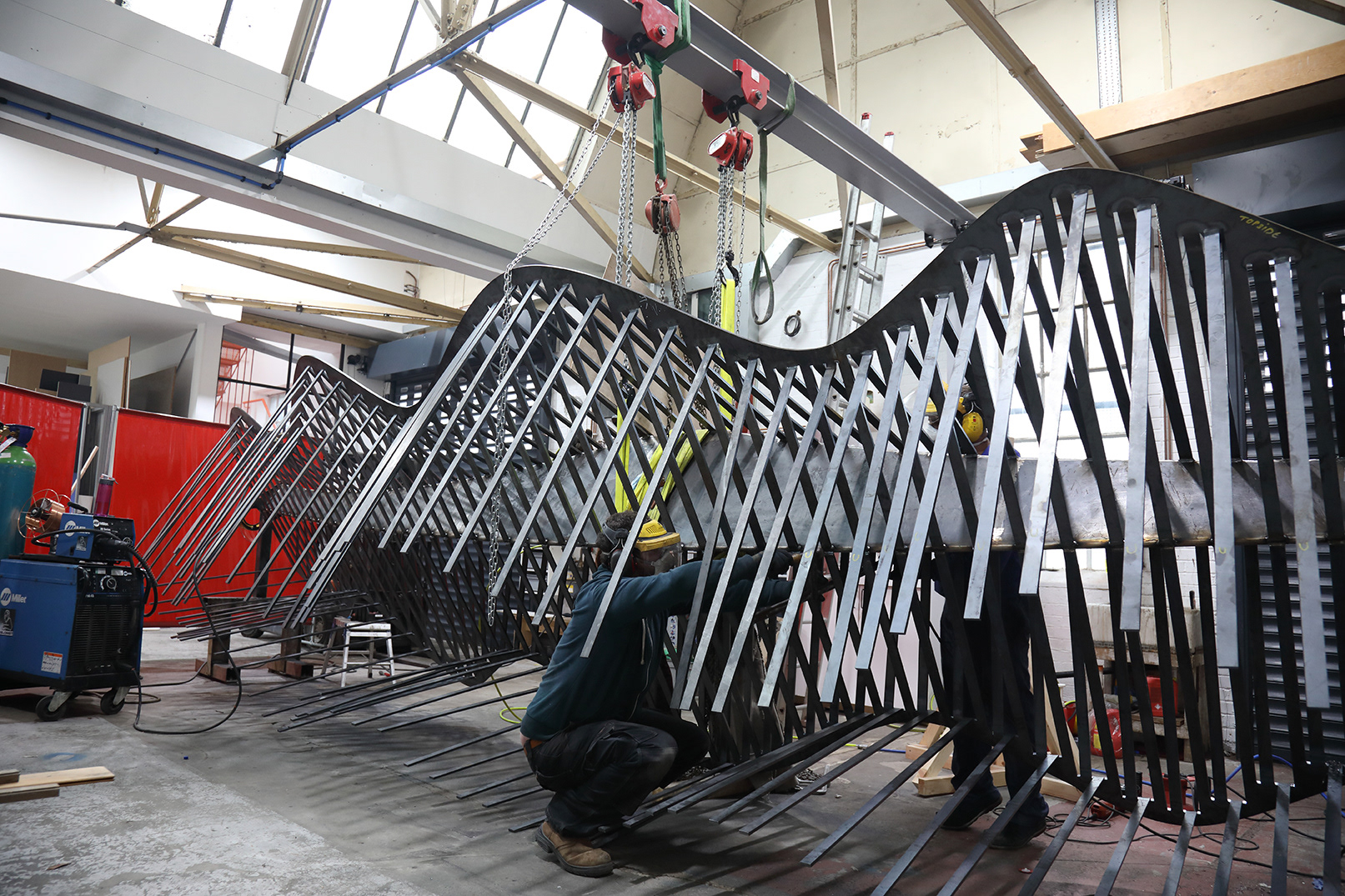 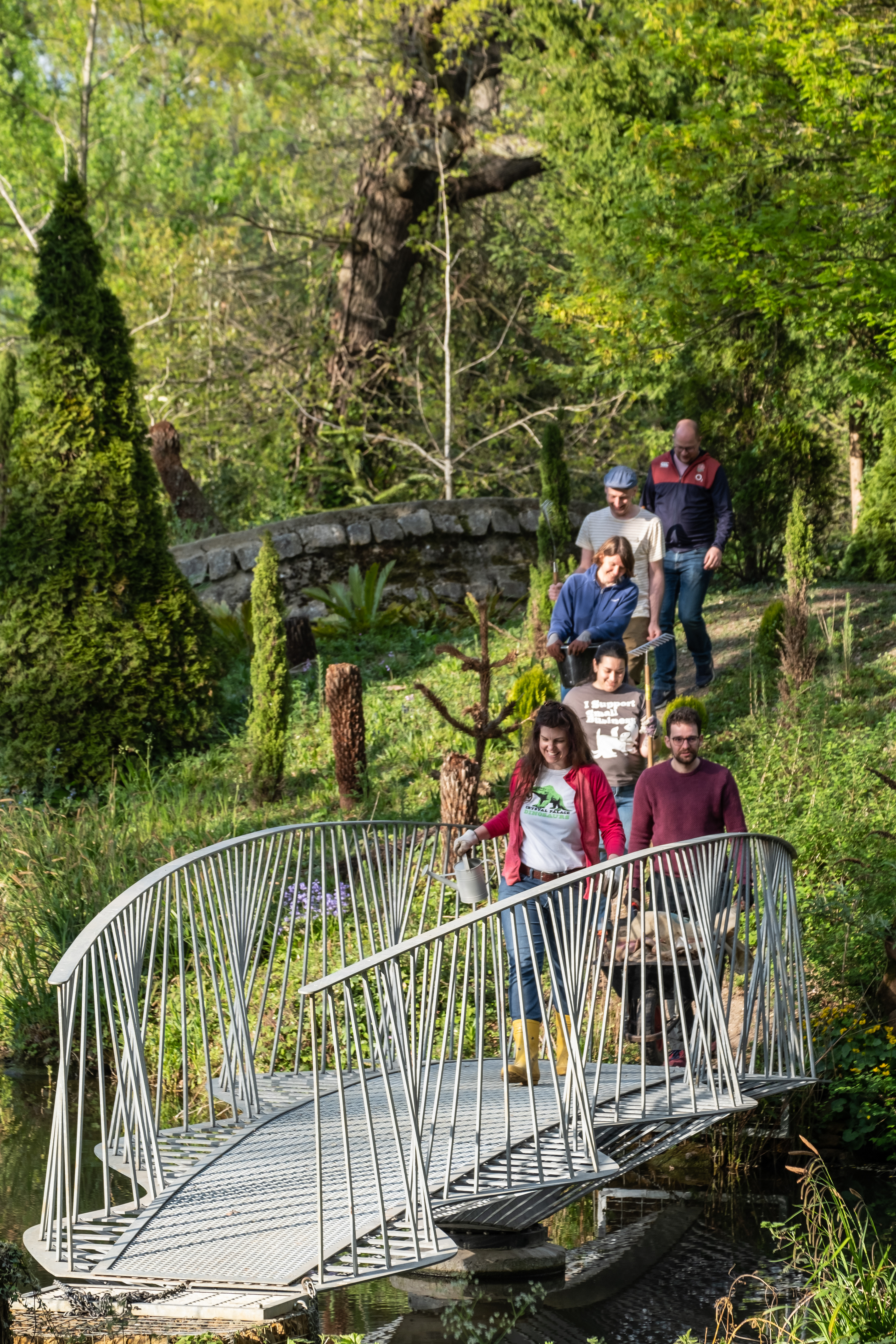 Swing Bridge, Crystal Palace Park
Tonkin Liu
The unique circumstances of the Crystal Palace Park Dinosaur Islands and the need
for a secure crossing inspired the structural artwork of Swing Bridge. Informed by
Tonkin Liu team’s decade-long immersion in biomimetic studies, the project delivers
three specific innovations: swinging to access the banks, undulating geometry for
structural strength, and the comb construction technique.
The 167-year-old, Grade I Listed concrete Dinosaur sculptures were configured to
depict extinct animals in the lost worlds of deep geological time. The team chose the
bridge’s location to mark the start of this sequence, helping to tell a story of evolution,
which in turn inspiring the reference to the prehistoric bony fish, the precursor to the
Dinosaurs and the evolutionary timeline depicted on the islands.
To protect access to the Dinosaur Islands, the bridge has been designed to remain in
the water and only make its connection to land when access is given for education and
for maintenance. This negates the need for a large protective barrier, keeps its
distance from the Dinosaurs, and requires only one central foundation. Crystal Palace
Park in turn enjoys, when the bridge is not in use, a sculptural artwork floating in water.
Form gives strength through geometry in each of the component of the structure.
A triangular spine beam delivers load to the central bearing, its tailored form is
minimised in response to the bending moments. The skeletal deck structure projects
out from the beam’s backbone like form. The bridge form gains overall strength from
being widest and tallest over its central support.
Minimal thickness of the steel sheet is achieved by optimising resistance through the
geometry. In the evolution of the first bony fish, an undulating movement produces a
force that propels it forward. The undulating form of the balustrade and deck resists
forces applied to the handrail through a push-pull action. The balusters lean backward
and forward along the length of the undulating deck, the outer acting as a strut and the
inner acting as a tie. The multiple bent and welded prongs act together like spokes in a
wheel to give the undulating form lateral stiffness. The frequency and pitch of the
oscillation have been engineered to find the optimum form.
Responding to budgetary constraints and drawing on the iconography of the bony fish,
Tonkin Liu proposed the laser-cut skeletal comb structural technique. The plate is
laser-cut to prongs of three different lengths. One prong remains flat to form the bridge
deck, one is bent up to form the balustrade, one bent down to form a strut to the lower
edge of the central beam, utilising the whole surface of the 10mm steel sheet. This
minimises material cost and wastage, reduces the amount of welding by 50%, and
allows for the direct expression of strength in sculptural form.
A story-telling process that searches for inspiration in nature has delivered technical
innovation in response to the unique circumstances of the site. The project was
instigated by the long-standing commitment and insightfulness of the Friends of Crystal
Place Dinosaurs, who raised funds from the GLA and crowdfunding, and delivered,
through a close collaboration with architects Tonkin Liu, engineers Arup, and locally based
fabricators, Cake Industries.
The complex steel structure was hot dip galvanized for long term corrosion protection, whilst also highlighting its unique characteristics which include toughness and abrasion resistance and its aesthetics.
Photographs © David Valinsky, James Balston, Lewis Brown
↑Back to Top