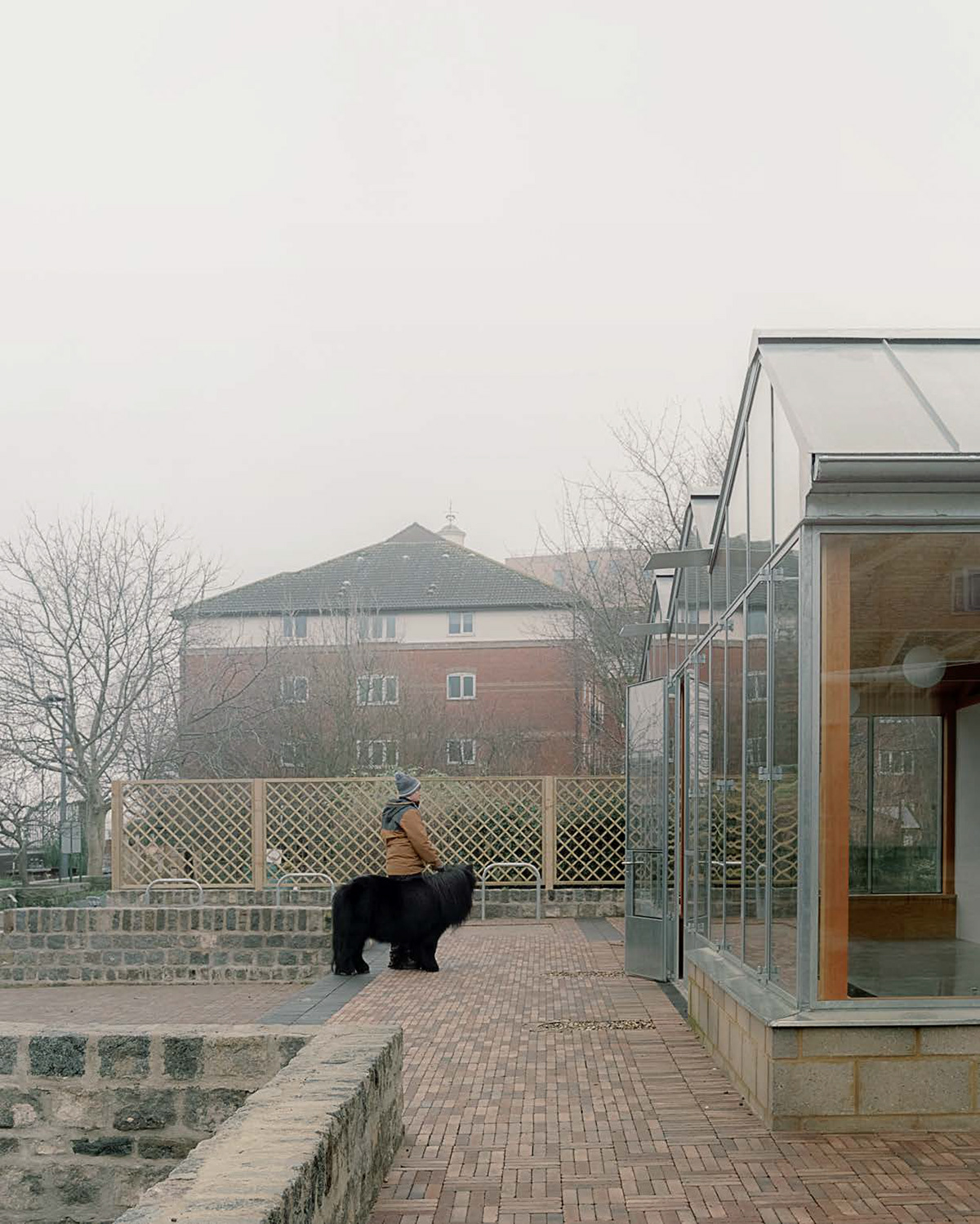 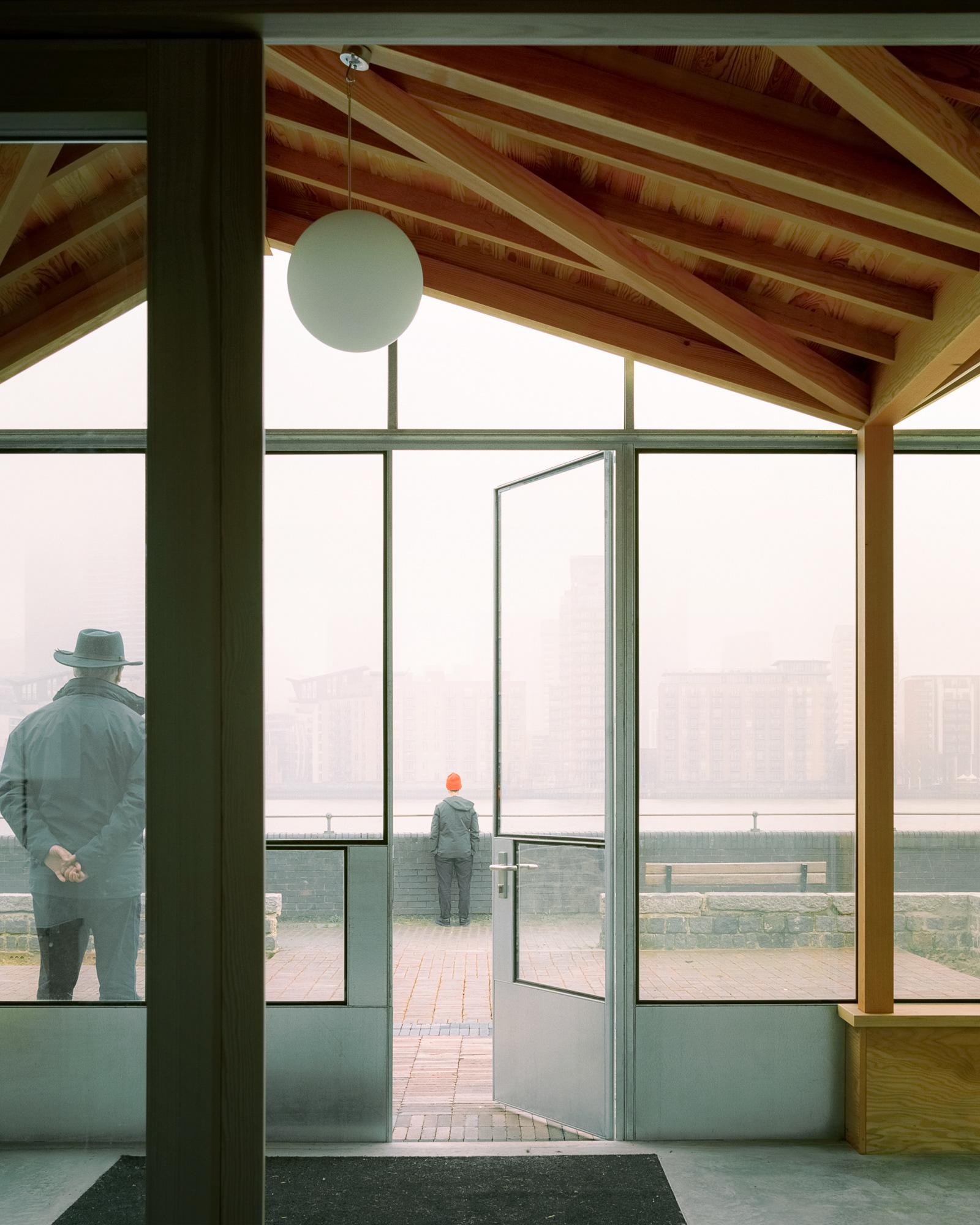 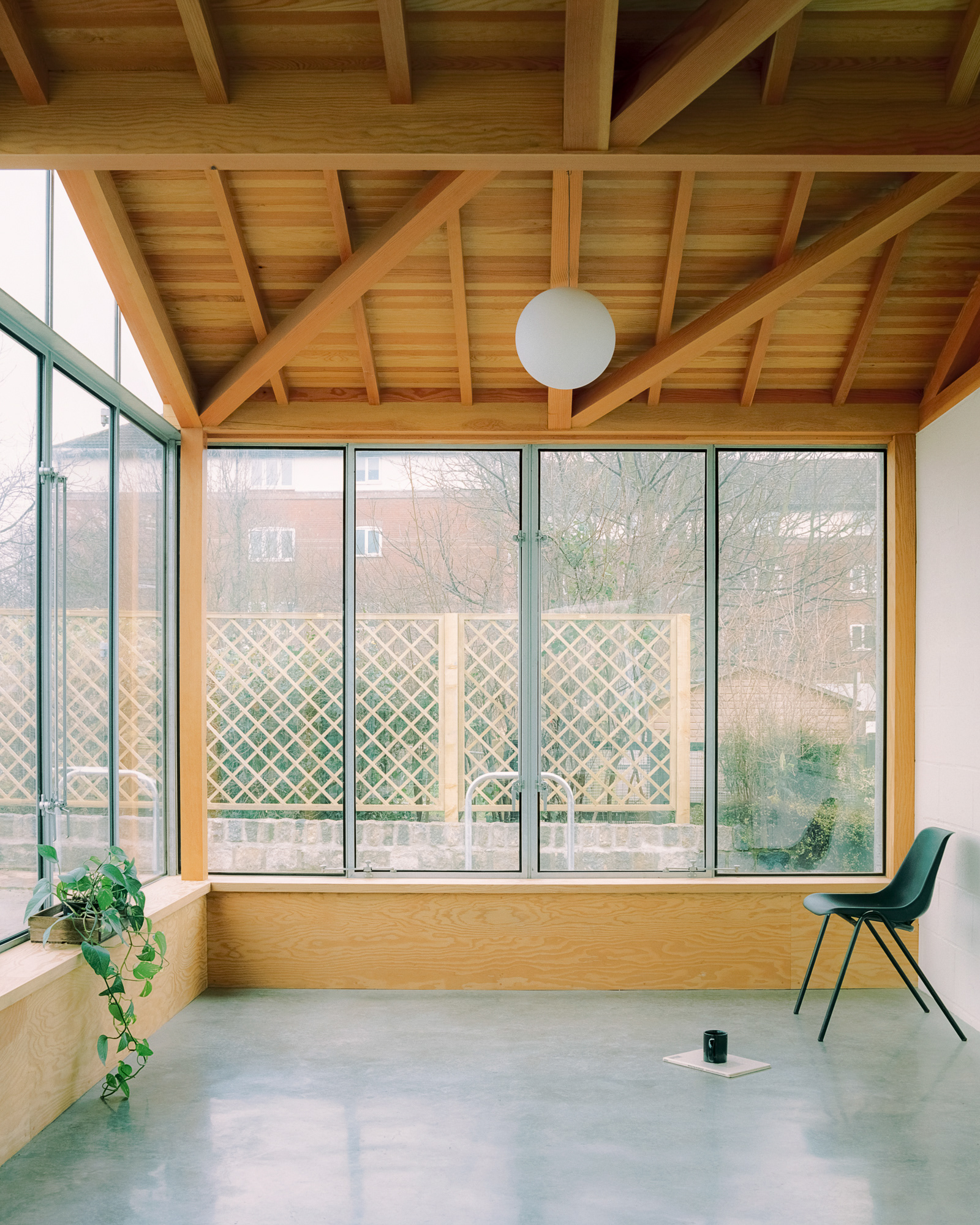 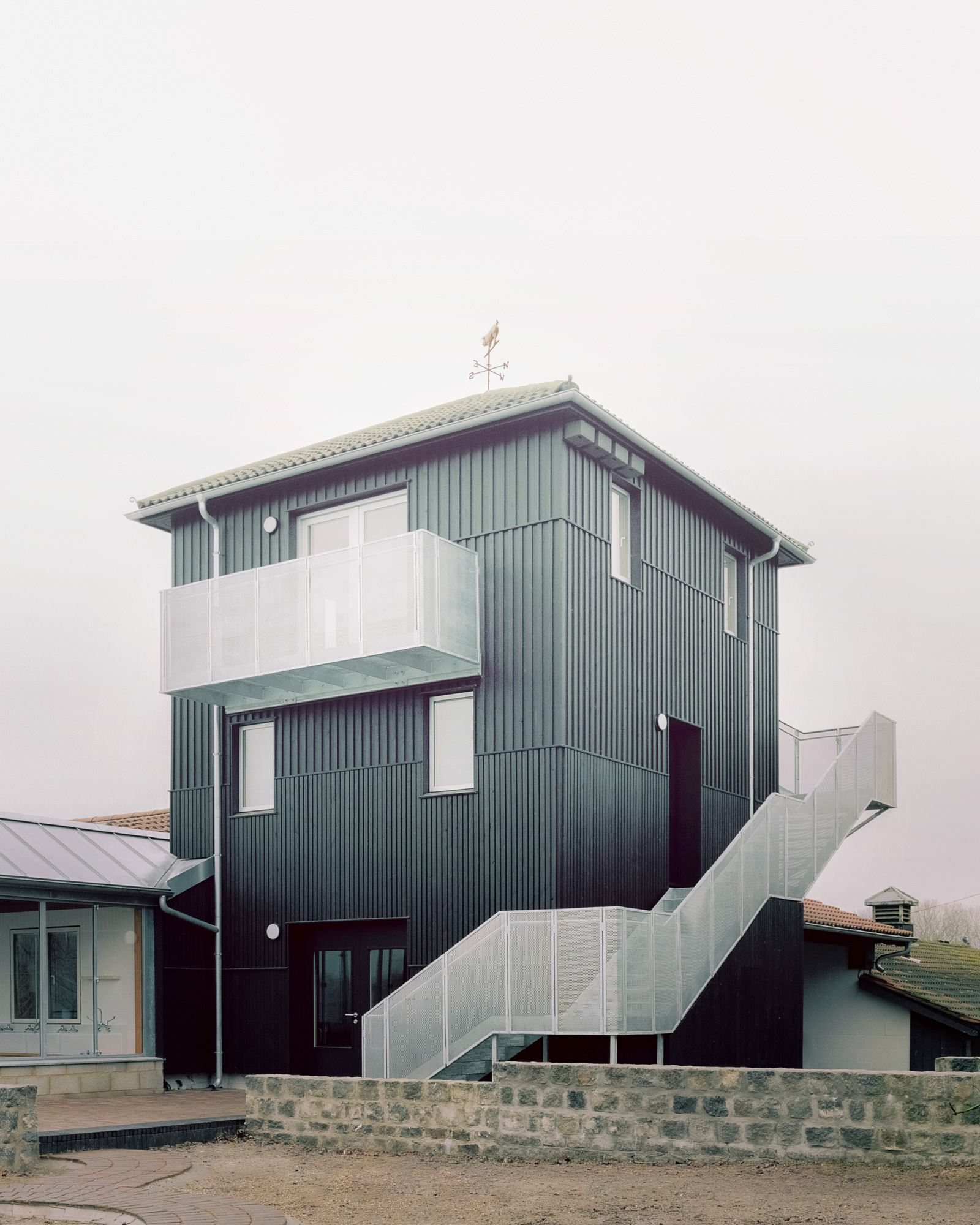 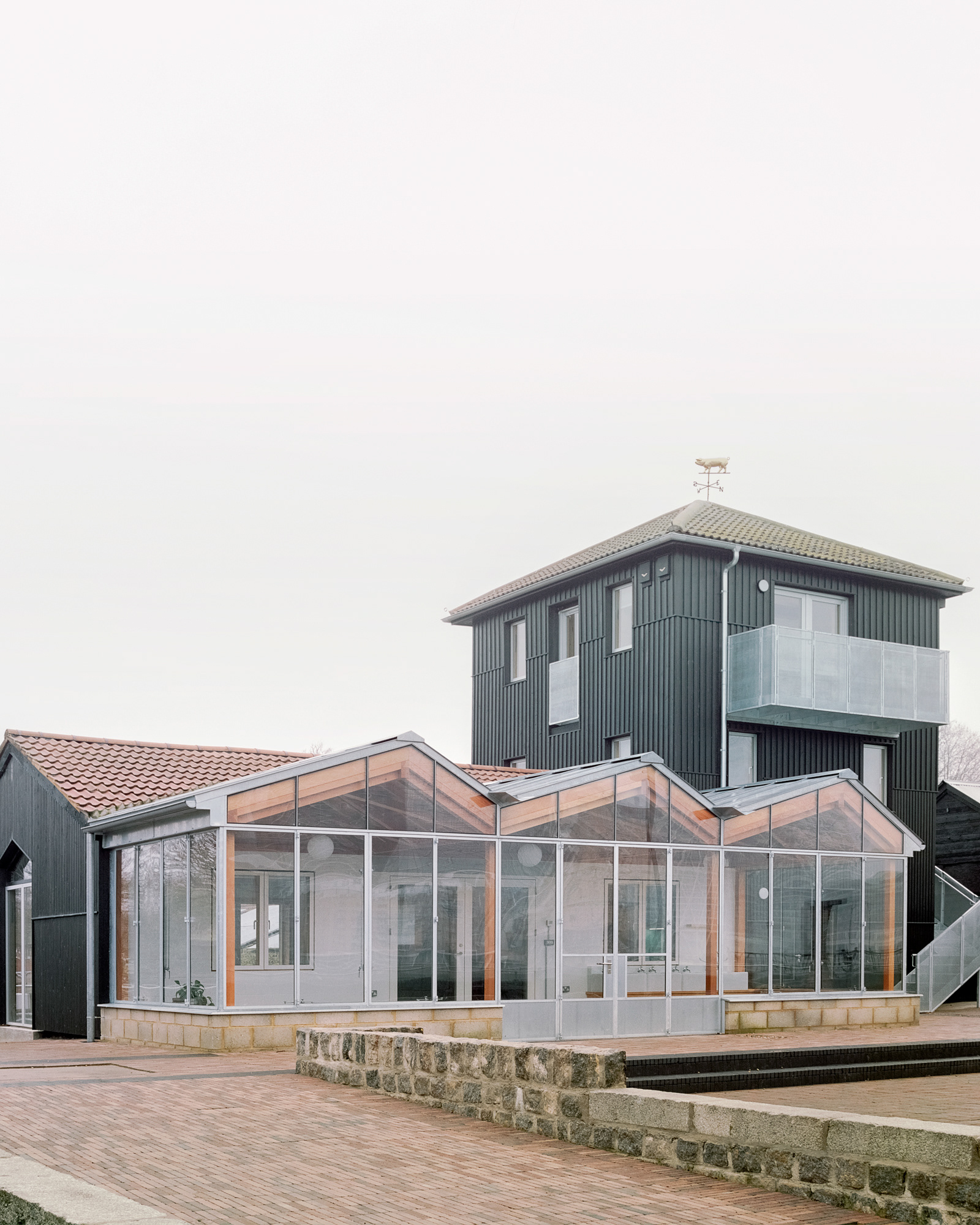 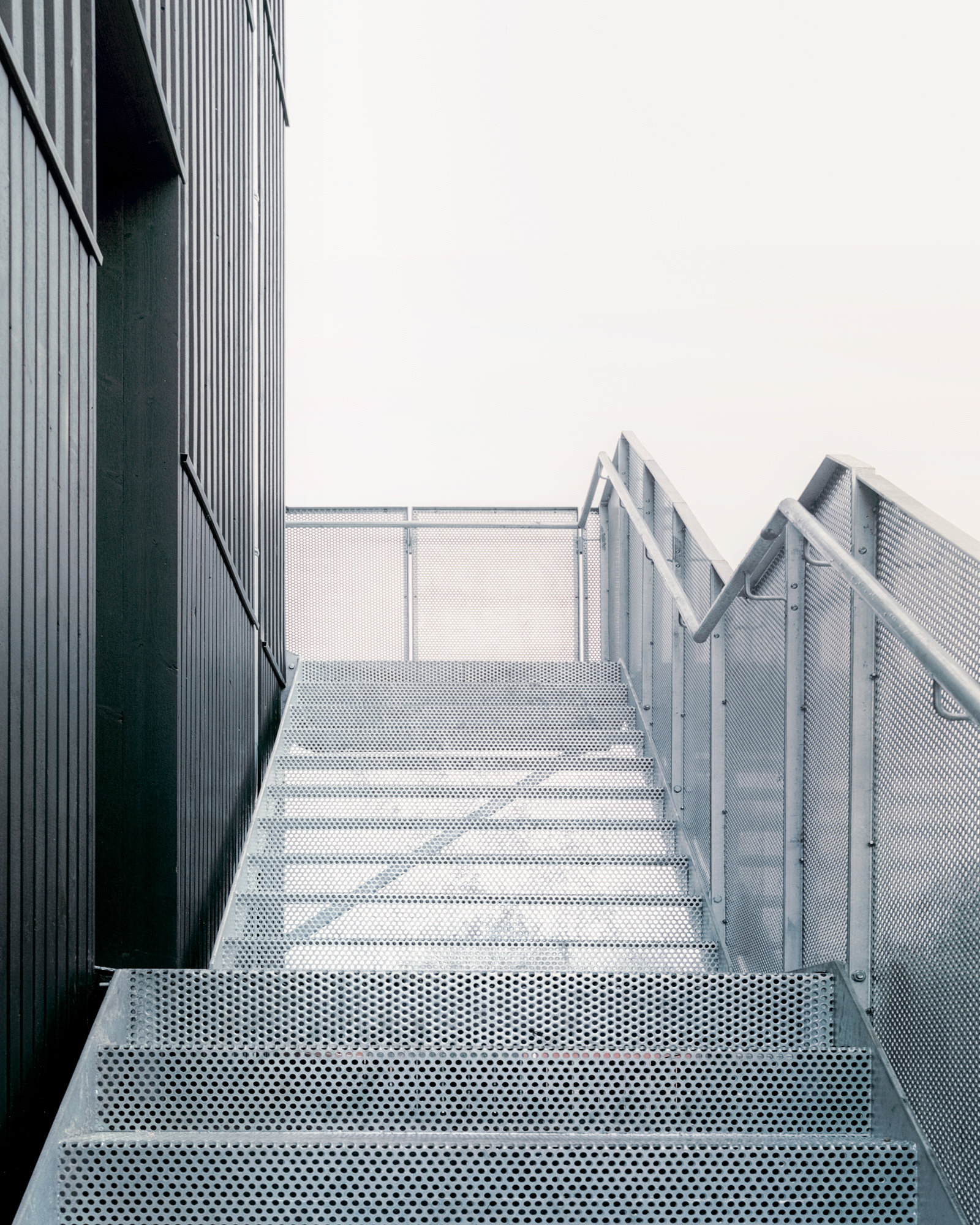 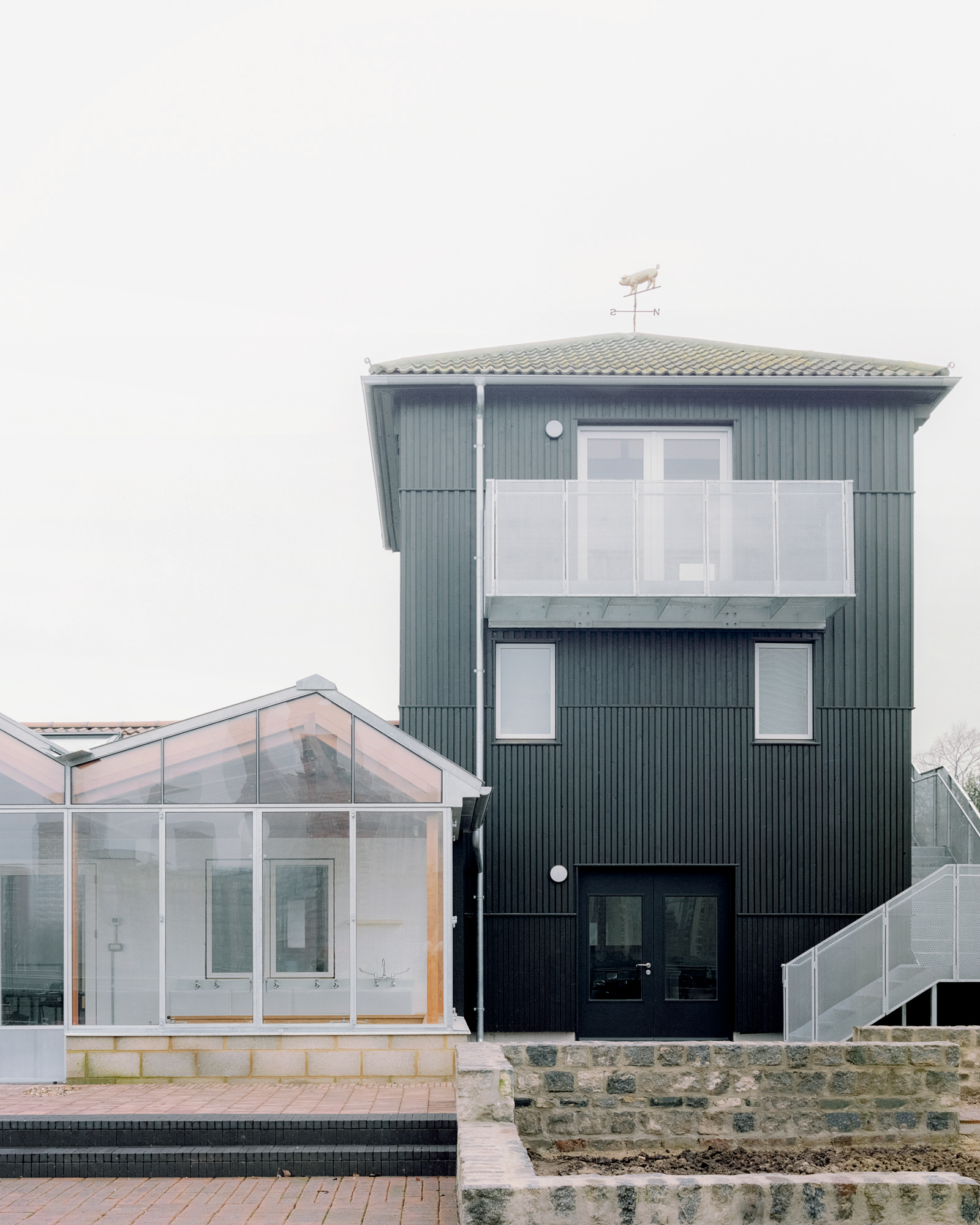 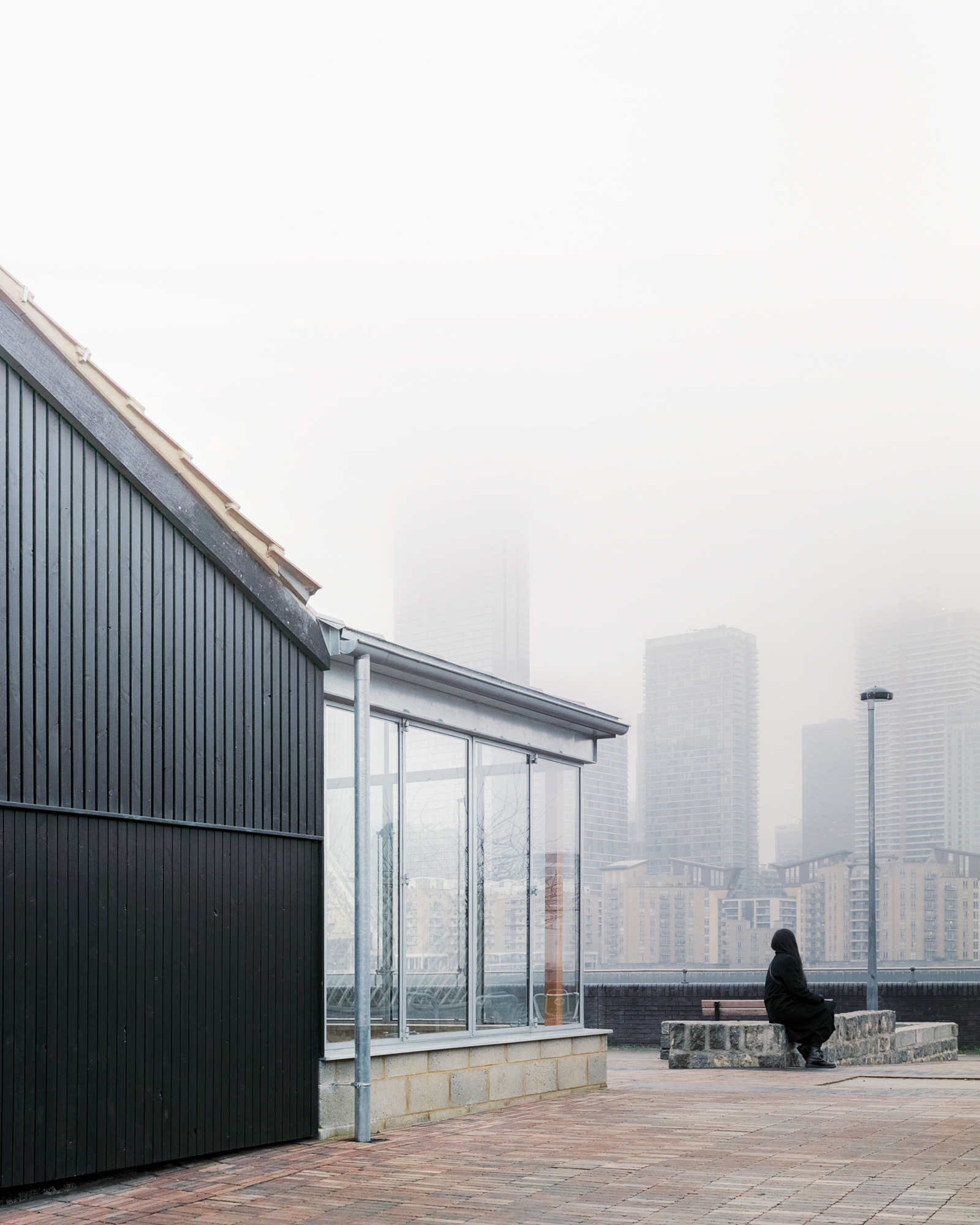 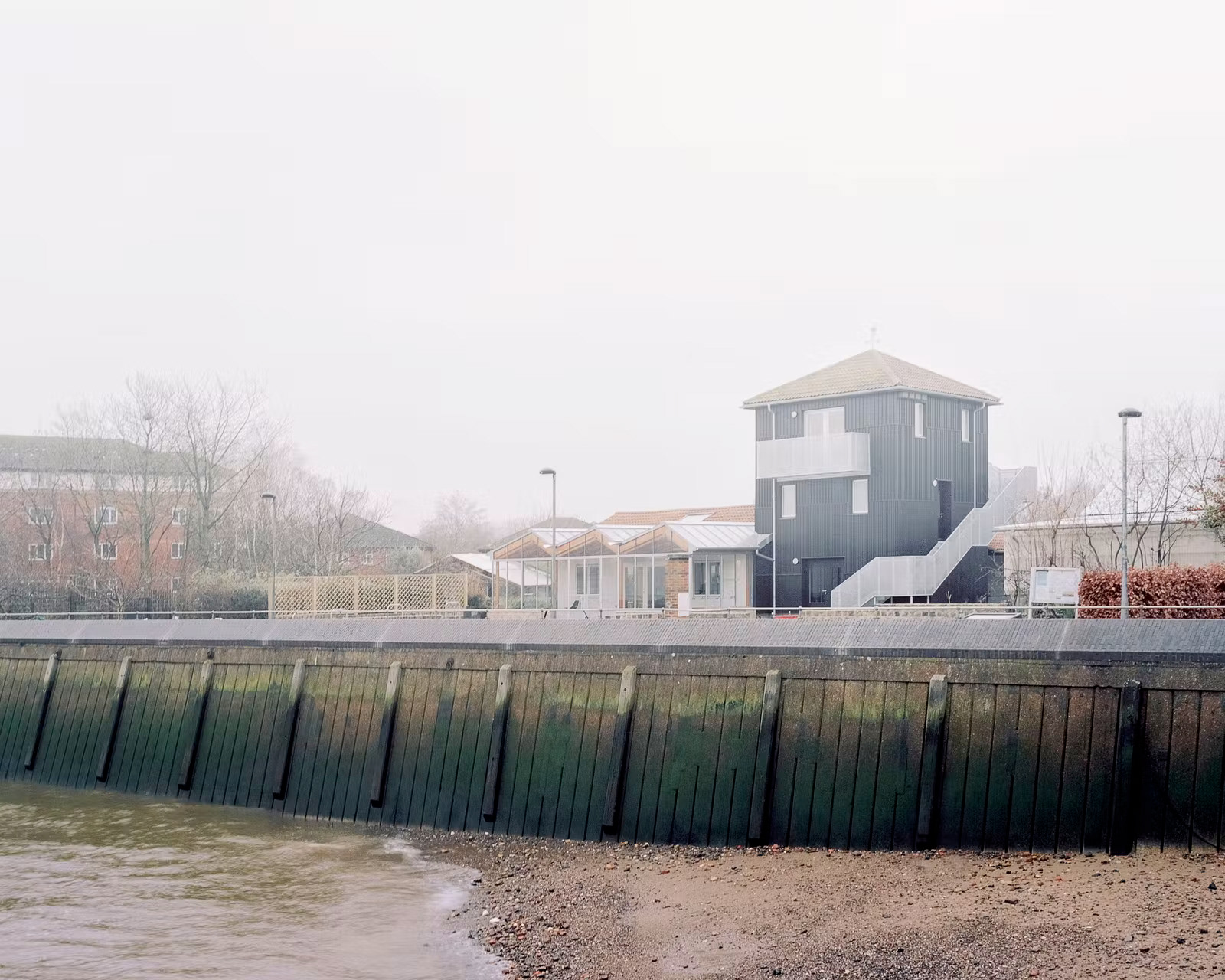 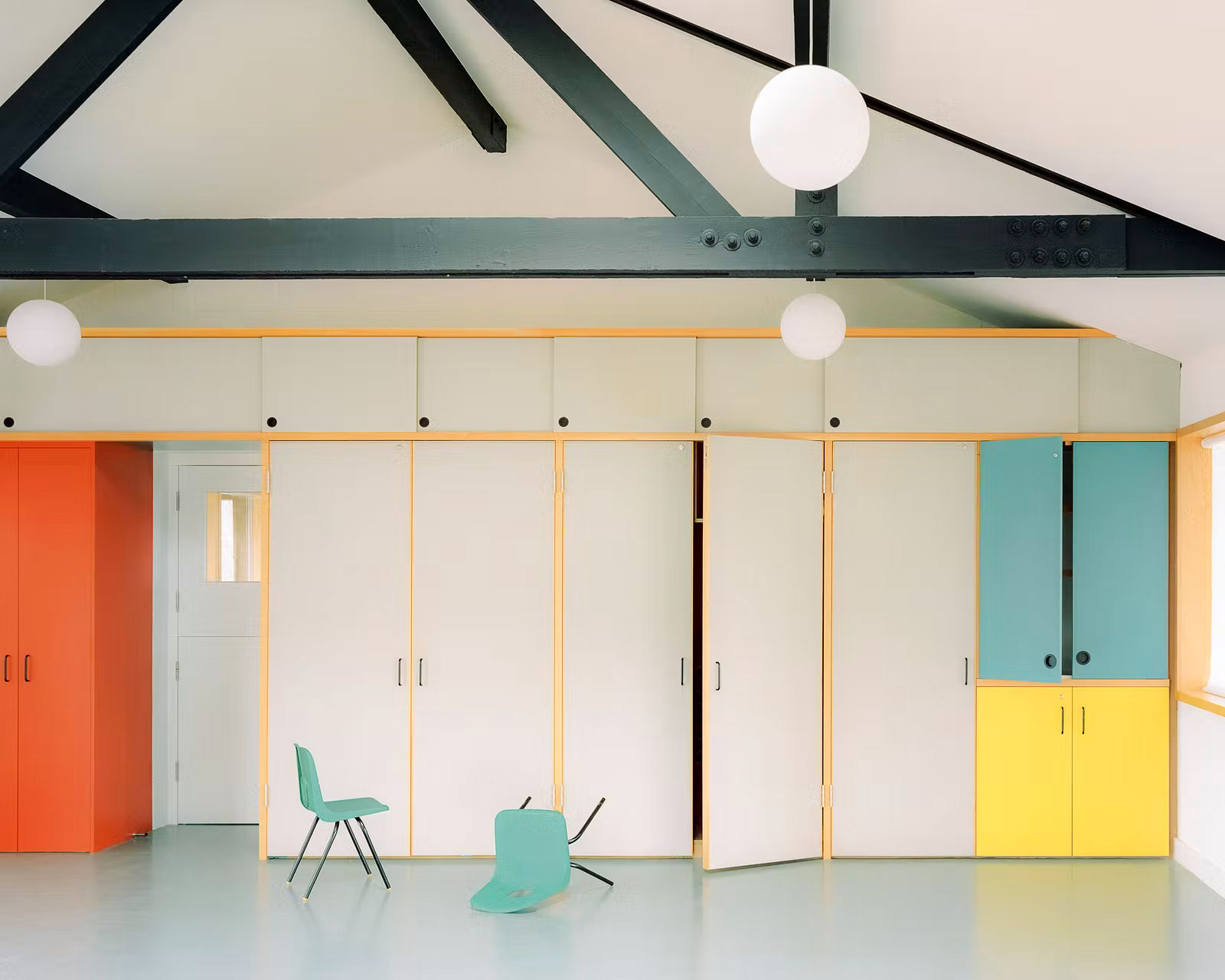 Surrey Dock Farm, London
Pup Architects
Pup Architects has completed an £860k refurbishment and extension of a number of educational and office buildings for a city farm in Rotherhithe. As well as upgrading and expanding 250m2 of existing facilities, the project strategically opens up the riverside with 320m2 of new public realm, enhancing access and connectivity from the Thames Path. Crucial to the project is the reinstatement of a three-storey tower, empty since a major fire over a decade ago, which presents a new civic face for the farm.

Surrey Docks Farm is a charity located on the banks of the Thames, opposite Canary Wharf. PUP was appointed through competitive tender in 2014 and gained planning permission thereafter. Having reached a number of fund raising targets, construction began in April 2019 with Structure Workshop as structural engineers and John Perkins Projects as main contractor. The development, which was Section 106 and grant-funded, is a major step forward in improving the farm’s capacity, extending its already significant community outreach. Key new spaces include a teaching kitchen, meeting rooms, offices, a toilet block, multi-use River Room and a glazed ‘orangery’ opening up the building to the expansive river views.
Established on its current site in 1986, Surrey Docks Farm is one of the only working city farms in the heart of London. Animals are reared on the 2.2 acre site which also houses an extensive range of community growing projects. These activities form the core of an educational program including local school groups, volunteers, classes and seasonal public events. The local area dominated by low-density housing developments from the 1970s and 1980s has sparse amenities and consequently the farm has an important role as a social and community centre. Its highly visible three-story tower takes on a civic role as a local landmark. This unique hybrid of agricultural, educational and civic functions has informed the character of the design at every scale. A key ambition of the development was to augment the site’s civic character, opening up the site and buildings to take
advantage of the riverside location and footfall. The farm had previously turned its back to the river, with the Thames Path fronted by tall bushes and the derelict tower. PUP’s response involved a mini-masterplan for this frontage. Rather than wholescale demolition and rebuilding, a series of careful interventions and additions were proposed. The reconfiguration of the landscaping serves to expose the existing buildings to the river, whilst creating outdoor leisure space and new ‘front door’ to the farm.
The presence of a new, glazed orangery on the riverside is central in the reorientation of buildings towards the Thames. Conceived as a partly indoor, partly outdoor space, it facilitates the farm’s educational activities. Almost doubling the teaching spaces of the ground floor it can either be used as a spacious foyer for the River Room or as a classroom in itself. This opens up the existing spaces towards the river and creates a strong connection to the outdoors through an expressive and warm structure. Constructed from douglas fir timber, it is structurally braced in the roof, which resting on only four 10cm square columns allows uninterrupted views. The choice of materials aims to carefully mediate between existing and new architecture whilst creating light and fresh spaces.
Reflecting the hybrid agricultural, educational and social function of the farm, simple robust materials are left in their natural state: galvanised steel, zinc, aluminium, concrete, pine and Douglas Fir. Resonating with the Walter Segal building elsewhere on the farm, new structures such as the orangery, toilet block, and tower floors are built with timber left exposed, creating robust and legible spaces.
The cladding is informed as much by the black barns of Sussex and Kent as the site’s history as a timber wharf and shipyard. The buildings are clad in black, rough-sawn vertical board-on-board timber, broken by horizontal bands as it moves upwards.
The farm has a strong set of values relating to the environment, responsible farming and sustainability. As an educational building it was important that the project was an exemplar and could be used as a demonstration of these values, an approach firmly established by another building on site by Walter Segal. A ‘fabric first’ approach to sustainability has been integrated into the construction from the start, increasing the thermal performance of the existing building whilst minimising embodied carbon. The project included re-cladding and insulating externally with high performance windows and doors throughout. Existing materials from the landscaping, such as brick and granite have been reused; the foundations were engineered to minimise the use of concrete and end of life re-use was considered as much as possible to avoid plastics and complex compound products. A 5000ltr water tank incorporated into the landscaping collects rainwater from rooftops, to be used for the toilets and irrigation on-site.
Galvanising formed a crucial part of the project's material palette in the facades, rainwater goods and in an external staircase and balconies.  It was also a central part of the projects aesthetic.
The project is defined by a hybrid character merging educational, community and agricultural functions. The versatility of galvanising allowed us to respond to this in our design by using it across a number of elements and situations. Galvanising is a common agricultural material for fence posts and gates and we liked its robust aesthetic but we also wanted to use it in more unexpected and refined ways ways for example the window frames of the orangery and also the new stair and balconies which wrap around the tower.
The adaptability of galvanizing allowed us to unify the appearance of the building and tie a number of elements together visually.  For example the new glazing and stair along side the raw zinc roof, gutters and downpipes. There were a number of challenges which emerged from the galvanising process for example ensuring good design for galvanizing. This was particularly relevant for the steel stair which was prefabricated and had to be assembled to high tolerances on site. To overcome any potential issues, the thickness of stringers and treads had to be carefully calculated to keep within design tolerance.  The size of the holes in the perforated treads and decks of the stair also had to be carefully designed to allow the molten zinc to escape.  Overall galvanising made an important contribution to the design.  It allowed us to unify and simplify a complex retrofit and to create a long lasting and robust building without sacrificing design quality.

Photographs © Simone Bossi
↑Back to Top